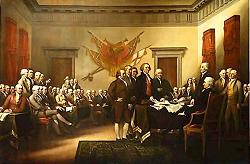 Independence Day is the most important (weltlich (im Gegensatz zu kirchlich)) secular holiday in the United States. It is celebrated on 4 July and marks America's (Unabhängigkeit) independence from Britain.

As you surely know, Britain once had various colonies on the American continent. Many British people moved to those colonies, and during the first 150 years of colonisation Britain did not (sich einmischen) interfere in (koloniale Angelegenheiten) colonial affairs. In 1763, (jedoch) however, Britain suddenly changed its (Politik) policy: it (enforce = aufzwingen, durchsetzen) enforced (Restriktionen, Einschränkungen) restrictions on American trade and manufacturing and tried to ((Steuern) erheben) levy more and more (Steuern) taxes on the colonists, e.g. taxes on paper, sugar and tea. A high tax on tea (schließlich) finally (provozieren, heraufbeschwören) provoked protest: on 16 December, 1773, some colonists dressed as Native Americans boarded British ships and threw tea into Boston harbour; that event became known as The Boston Tea Party. Britain (wiederum, seinerseits) in return (pass a law = ein Gesetz verabschieden) passed another law in 1774—the Five Intolerable Acts—which wasn't accepted by the colonists. So in 1775, the War of Independence began.

At the beginning of the conflict, only few wanted to be independent from Britain. Most colonists thought that the English Parliament (war schuld) was to blame for the high taxes, and so they asked King George III for (Unterstützung) support. Seeing, however, that the king didn't help them but (stattdessen) instead sent an army to fight the colonists, more and more colonists (schließlich) eventually wanted independence from Britain.

On 2 July, 1776, Congress (stimmen, abstimmen) voted for independence. The (Inhalt) content of the (Deklaration, Erklärung) declaration was under discussion for two days before, on 4 July, the Declaration of Independence was accepted. (The original document can now be seen in the National Archives exhibition hall in Washington, D.C.)

Whilst in 1776, colonists were still fighting for their independence on 4 July, today there are celebrations everywhere throughout the country. In parades lots of people are dressed in 18th century uniforms, and in the evenings you can enjoy (atemberaubend) breathtaking (Feuerwerk) fireworks.