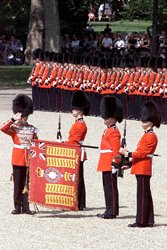 Trooping the Colour is a spectacular and colourful military parade that marks the official birthday of the Queen (whose real birthday is on 21 April). Each June, the parade takes place in London and is (to broadcast = übertragen, senden) broadcasted on TV so that millions of people around the globe can enjoy the event.

The custom of Trooping the Colour dates back to the 17th century. In battle, brightly-coloured flags–called coulours–where used so that soldiers could identify their troops. Every regiment had their own colour, and in order to (vertraut machen) familiarise each man with the flag of their regiment, it became a custom to display–or troop–the colour in front of the soldiers each morning.

In 1805, the tradition started to hold the ceremony as a birthday parade for the (Monarch) Sovereign. The first king to be honoured in that way was George III (who was born on 4 June 1738). During his (Herrschaft, Regentschaft) reign, the weather must have been so fine at his birthday parades that ever since Trooping the Colour has been held in May/June– (ohne Beachtung
hier:unabhängig von) regardless of the monarch’s real birthday.

Trooping the Colour is now also known as The Queen’s Birthday Parade and usually takes place on the second or third Saturday in June. The parade is held by the Queen’s Household Division that comprises the Household Cavalry (the Life Guards and the Blues & Royals) and five regiments of Foot Guards: Grenadier Guards; Coldstream Guards; Scots Guards; Irish Guards and Welsh Guards. Every year, the colour is trooped by another regiment of the Foot Guards.

About 1400 soldiers, 200 horses and 400 musicians march from Buckingham Palace along The Mall to Horse Guards Parade and back again on that day. If you happen to be in London for Trooping the Colour, the best place to watch the parade is The Mall. Make sure, however, to arrive early as lots of people will be there to (flüchtigen Blick erhaschen, ganz kurz sehen) get a glimpse of the troops (or even of the Queen herself).