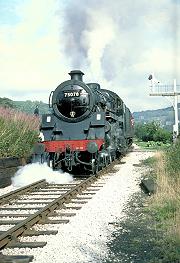 Steam train on Keighley & Worth Valley

Perhaps because it was the birthplace, Britain can (über etwas verfügen, sich mit etwas brüsten) boast more railway attractions per square mile than any other country. The figures are impressive: more than 100 (hier: traditionelle) heritage railways and 60 steam museum centres are home to 700 (betriebsbereit) operational engines, steamed-up by an army of 23,000 enthusiastic volunteers and offering everyone the chance to (würdigen, genießen) savour a bygone age by riding on a lovingly (erhalten) preserved train.

Wales deserves a special mention for its Great Little Trains. Though small in stature, these (Schmalspurbahnen) narrow-gauge lines are real working railways, originally built to (ziehen, transportieren) haul (Schiefer) slate and other minerals out of the mountains, but now a wonderful way for visitors to admire the scenery, which is breathtaking. There are eight lines to choose from and one, the Ffestiniog Railway, is the oldest of its kind in the world.

Then there are the railway museums that are historic in their own right. Part of Manchester’s Museum of Science and Industry is situated in the world’s oldest passenger station; and the “Thinktank” museum in Birmingham contains the world’s oldest active steam engine, designed by James Watt in 1778.

But it is North East England that is known as the birthplace of railways for here, around Newcastle, the world’s first (Straßenbahnlinien) tramways were laid and, later, the world’s first public railway between Stockton and Darlington steamed into life. At Shildon in County Durham, a £10 million permanent Railway Village is taking shape, to open in the autumn, the first out-station of the National Railway Museum. 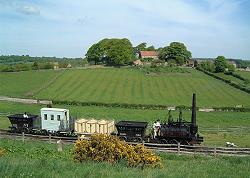 At Beamish, the open-air museum of North Country Life–where the past is brougth magically to life–there’s an opportunity to see one of the earliest railways re-created. Feel the wind – and steam – in your hair as you travel in open carriages behind a working replica of a pioneering engine such as Stephenson’s Locomotion No.1, built in 1825.

If you can, go south-westwards to Cornwall where the story of the great engineer Trevithick began. In his home town of Camborne is a bronze statue of him holding a model of one of his engines. Not far away the little (Häuschen mit Reetdach/Schilfdach/Strohdach) thatched cottage where he lived is open to the public. It is hard to imagine that (Kritzeleien) scribblings in this (bescheiden) humble home were to lead to the “high-pressure steam engine” and the world would never be quite the same again.