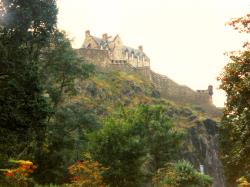 The location of Edinburgh – capital of Scotland and a World Heritage Site – is spectacular, with the castle high on its rock, views over the River Forth, elegant architecture and its own extinct volcano, Arthur’s Seat – described by thriller writer Ian Rankin as “a natural wonder, a wilderness in the middle of a city.” A favourite Edinburgh pastime, beloved of students and others, is to climb to its summit to see the sun rise over the sea.

But one need not be so energetic to enjoy Edinburgh. For this is a city that is attractive - and easy - to walk around. Arriving in the city centre, visitors will be captivated by the Old Town skyline, which forms a stunning backdrop for Princes Street. Not many cities can boast a high street with shops on one side and an ancient castle and beautiful gardens on the other. Princes Street and its gardens provide the unique setting for a number of events throughout the year, such as the Edinburgh International Festival and Fringe Festival, the Edinburgh International Jazz and Blues Festival (all taking place in August), and Edinburgh’s Winter Festivals (from November to January). Edinburgh is proud to host the world’s largest street party at New Year, with spectacular fireworks, live music concerts and dancing.

A few minutes away is the historic Royal Mile, cobbled and atmospheric, leading down from the castle to the Palace of Holyroodhouse, Queen Elizabeth II’s official residence when in Scotland, and whose new Queen’s Gallery shows items from the Royal Collections.

Along the Royal Mile is an eclectic range of museums which portray different aspects of Edinburgh’s and Scotland’s heritage, starting at the Castle itself with the National War Museum telling stories of the Scot in battle at home and abroad. At the other end, the Museum of Edinburgh, in its 16th century house, provides historical context – as well as the story of Greyfriar’s Bobby, the faithful dog whose statue is on the George IV Bridge by the kirkyard where his master is buried and by whose grave he remained for 14 years.

Other attractions include The Scotch Whisky Heritage Centre, where research into whisky making can finish with a sampling one of 270 varieties at the bar; the Camera Obscura, where one can experience a panoramic view of Edinburgh from inside a giant Victorian camera; the crammed and evocative Museum of Childhood and the Writers’ Museum, devoted to Scotland’s literary heroes, Robert Burns, Robert Louis Stevenson and Sir Walter Scott – who also has a monument, a famous landmark, on Princes Street.

Scotland has modern literary heroes too, such as J.K. Rowling - who wrote her first Harry Potter book in a café in the Old Town and Ian Rankin, whose ‘Rebus’ crime novels have made the streets of Edinburgh familiar to readers all over the world: a tour takes visitors to some of their locations.