In Footsteps of ‘Braveheart’

This year marks the 700th anniversary of the death of Scottish hero William Wallace: (unsterblich geworden) immortalised as ‘Braveheart’ on film and in legend. Brian Pedley tours Wallace country – the medieval city of Stirling and the pastoral Borders south of Edinburgh – in the footsteps of Braveheart. 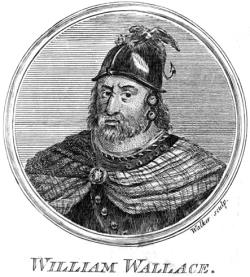 The mid-afternoon sun was already in its final throes. From the northwest, a brisk wind hissed through the avenue of beeches, oaks and conifers that lined the few hundred yards of footpath. Two family groups and a team of hikers trekked behind me from the car park that lies tucked beside the road to St Boswells to Dryburgh, 40 miles south of Edinburgh.

As the wind quickened, we zipped our coats to our chins, gazed upwards and shared a few reverential moments with the statue of Sir William Wallace, freedom fighter and Scottish hero. Standing some 21 feet high, on his ten-foot plinth, Wallace looked at his most lordly, (festhalten, umklammern) clutching his (Schwert) broadsword, with his (Schild) shield resting alongside, looking out beyond a sheer drop to the River Tweed, as it glided like (geschmolzen) molten silver towards Berwick.

On August 23, 1305, after (Niederlage) defeat at the Battle of Falkirk and eventual (Verrat) betrayal, Wallace was publicly (gehängt, gestreckt und gevierteilt) hung, drawn and quartered in Smithfield, London. Seven hundred years on, ‘Braveheart’ has lost none of his power to (anlocken) lure pilgrims, even on this (stürmisch) blustery midwinter day.

The Dryburgh statue, which was (enthüllt) unveiled in the grounds of Bemersyde House on September 22, 1814 is believed to be the first monument to be raised to Wallace in Scotland. Built of red sandstone, the figure, (in Auftrag gegeben) commissioned by Stuart Erskine, the 11th Earl of Buchan, is a testament to the cult of Wallace that swept across Scotland in the 19th century, and which persists to this day.

Stirling, a medieval town 36 miles to the north west of Edinburgh, is the scene of Wallace’s greatest victory in battle and of the most spectacular tribute to his memory. On September 11, 1297, at Stirling Bridge, Wallace’s volunteer army of 16,000 (to rout = in die Flucht schlagen) routed one of Europe’s most formidable fighting forces in Europe, the 50,000 foot soldiers and 1000 cavalry of the English King Edward I.

The 220–foot Gothic tower of the National Wallace Monument stabs the sky from the top of the (dicht bewaldet) densely wooded Abbey Craig that was formed by an erupting volcano 300 million years ago. Standing 310 feet above sea level, it (winken) beckons to visitors strolling the (Schutzwall) ramparts of Stirling Castle, occupying its own great rock, one mile away, across the River Forth.

A big-screen video presentation in the 80-seat auditorium in the castle’s Visitor Centre sets the scene. Standing at the lowest crossing point of the River Forth, Stirling, we learn, formed a natural fortress. For more than a thousand years, warring tribes fought to (besitzen) possess it. When the Scottish King Alexander III died in 1286 without an (Erben) heir, Edward I seized control of Scotland, its government and institutions.

At the National Wallace Monument, I took the free bus that makes the steep climb from to the tower itself. Inside, on the first floor, I found visitors transfixed by the life-sized figure of William Wallace, (hier: erklären) haranguing the English king with an electronically projected talking head. “You have my body,” he rasped. “But you have never had my loyalty and you will never have my respect.”

We learn how William Wallace was born in the village of Elderslie, west of Glasgow, around 1270. Drawn into the guerilla war being waged against English rule, Wallace murdered William Hazelrig, the Sheriff of Lanark in the spring of 1297 to avenge the killing of his wife – and was immediately (geächtet, als vogelfrei erklärt) outlawed.

Now the principal focus of Scottish rebellion against English rule, Wallace joined forces with fellow freedom fighter Andrew de Moray at Dundee and prepared to meet the English army which was travelling north to Stirling Bridge, beneath the Abbey Craig.

The English rode the bridge into a bloodbath of their own making. Cavalry horses (sich abquälen, steckenbleiben) floundered in the (sumpfig) boggy ground. Riders (hier: ertranken) were drowned under the weight of their own (Rüstung) armour. Troops were literally cut to ribbons by Scottish swords, spears and (dagger = Dolch) daggers.

The triumph was short-lived. In the July of the following year came the defeat at Falkirk, midway between Edinburgh and Stirling, followed by Wallace’s (Gefangennahme) capture and (schließlich) eventual execution.

In an exhibition that tells the story of the building of the monument, I learned how the nationalist struggles that were being waged across Europe brought about a worldwide resurgence of interest in Wallace’s story. The Wallace National Monument was built entirely by public (Spenden) subscription – but with nationalist campaigners Kossuth of Hungary and Garibaldi of Italy among the (Spender) donors.

In a building that has 244 steps to its (Spitze) summit, I joined a family group that was clustered around Wallace’s five and a half foot broadsword. “In order to wield a sword of this size, Wallace needed to be of considerable stature,” said the notice. “About (ungefähr 1,98m) six foot, six inches in height.”

I learned also that Scotland has at least 20 monuments that commemorate Wallace, including a ‘Wee Wallace’ on top of the Athenaeum in Stirling and a bronze statue in Aberdeen. At St. Bartholomew’s Hospital in London, in the historic Clerkenwell quarter with its village-like atmosphere, Wallace’s execution is commemorated by a (Plakette) plaque.

At the very first of Scotland’s Wallace monuments in Dryburgh, I watched the sun slipping away behind the three great peaks of the Eildon Hills. Two ladies with terrier dogs joined me. Behind us stood Wallace, as if in quiet (Zufriedenheit) contentment at the (schiere Pracht) sheer splendour of the land for which he died.

For more information on Scotland, see www.visitscotland.com. For more touring ideas around Britain, including independent tours of Scotland by car and train, see VisitBritain’s website, www.visitbritain.com.