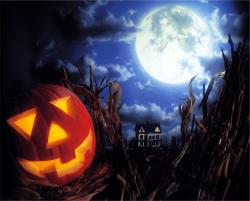 Halloween is a great day for parties. Children dress up as witches, ghosts or vampires, and they go from house to house playing TRICK OR TREAT. But what’s the origin of this custom?

Halloween means Hallows’ Evening. It is the evening before All Hallows’ Day (now called All Saints Day), a Christian holiday, celebrated on the 1st of November. But that day was important already in ancient times. On the 1st of November, Celtic peoples celebrated the festival of Shamhuinn, which marked the beginning of winter and the Celtic New Year.

“How come a Christian and a pagan holiday are celebrated on the same day?” you might ask, “Is it just a coincident?” – No, it isn’t. When Christianity spread, the Church tried to disturb the pagan customs as little as possible, and so they merged their festivals with pagan ones.

It was widely believed that on Hallows’ Evening the dead would rise from their graves to roam the earth. Afraid of evil spirits, people therefore either wore ugly masks to frighten those spirits away, or they stayed at home saying prayers. Some would also go from house to house, begging for ‘soul cakes’, square pieces of bread with currants. In return they promised to pray for dead members of the donors’ families.

Going from house to house, begging for sweets – doesn’t that sound familiar? Indeed, that’s the origin of TRICK OR TREAT. Be aware, however, as the custom has changed! Nobody is going to pray for you nowadays. Instead, if you don’t have a TREAT for the children in front of your door (some sweets for example), they will most likely play a TRICK on you – that’s what TRICK OR TREAT is all about.