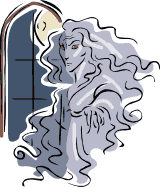 There was a horrible storm that night, but (davon abgesehen, sonst) apart from that nothing (gruselig) scary happened. The next morning, however, when the family came down to breakfast, they found the terrible stain of blood once again on the floor. Washington cleaned it a second time, but the second morning it appeared again. The third morning it was there, too, although the library had been locked up at night by Mr Otis himself.

The following night, all (doubt - Zweifel) doubts about the existence of the ghost were finally (remove - hier: auslöschen, beseitigen) removed forever. At eleven o'clock the family went to bed and some time after, Mr Otis was awakened by a (seltsames Geräusch) strange noise in the corridor, outside his room. It sounded like the (Klirren, Rasseln) clank of metal, and it came nearer every moment. Mr Otis got up and looked at the time. It was exactly one o'clock. So Mr Otis put on his (Pantoffeln) slippers, went to the door and opened it. There, right in front of him, stood the ghost - his eyes were as red as (brennende Kohlen) burning coals; long grey hair fell over his shoulders and from his (Handgelenke) wrists and (Fußknöchel) ankles hung heavy (Ketten) chains.

“My dear Sir,” said Mr Otis, “you must oil those chains. It's impossible to sleep with such a noise going on outside the bedrooms. I have therefore brought you this bottle of (Schmiermittel) lubricator, and I will be happy to supply you with more if you (benötigen, wünschen) require it.” With these words Mr Otis laid the bottle down, closed his door and went back to bed.

(schockiert, empört) Shocked, the Canterville ghost stood quite (bewegungslos, regungslos) motionless for a moment, but then he (growl - hier: heulen (Gespenst)) growled angrily. Just at this moment, the twins appeared on the corridor and threw a large (Kissen) pillow at him! The ghost hastily escaped through the wall, and the house became quiet again.

When the ghost reached his small secret (Kammer) chamber, he took (take a deep breath - tief Luft holen) a deep breath. No ghosts in history had ever been (treat - behandeln) treated in this manner!