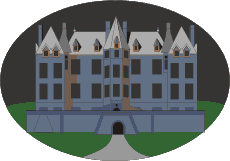 When the American, Mr Otis, bought Canterville Castle, everyone told him that this was very (dumm, töricht) foolish, as the place was (haunt - spuken
the place is haunted - an diesem Ort spukt es) haunted. But Mr Otis answered, “I come from a modern country, where we have everything that money can buy. And if there were such a thing as a ghost in Europe, we would have it at home in one of our museums.”

A few weeks later, on a lovely July evening, Mr Otis, his wife and their children, Washington, Virginia and the (Zwillinge) twins, went down to their new home. When they entered the (Allee) avenue of Canterville Castle, the sky suddenly became dark and a (unheimlich) spooky stillness was in the air.

Mrs Umney, the (Haushälter/in) housekeeper, led them into the library of the castle, where they sat down and began to look around. Suddenly, Mrs Otis saw a red (Fleck) stain on the floor just by the (Kamin) fireplace and said to Mrs Umney, “I am afraid something has been (spill - verschütten, vergießen) spilt there.”

“Yes, madam,” said the old housekeeper in a low voice, “blood has been spilt on that (Stelle) spot.”

“How terrible,” said Mrs Otis; “I don't want any blood-stains in my sitting-room. It must be (remove - entfernen) removed at once.”

The old woman smiled and answered, “It is the blood of Lady Eleanore de Canterville, who was murdered on that spot by her husband, Sir Simon de Canterville, in 1575. Sir Simon disappeared seven years later. His body has never been found, but his ghost still haunts the Castle. The blood-stain is a tourist attraction now and it cannot be removed.”

“That is all (Unsinn, Blödsinn) nonsense,” said Washington, the eldest son of the Otis family, “ (Fleckentferner) stain remover will clean it up in no time,” and he took a bottle of stain remover out of his pocket and cleaned the spot. But as soon as the blood-stain had disappeared, a terrible flash of lightning lit up the room and a fearful (Donnerschlag) peal of thunder made the whole building shake.