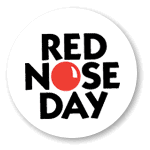 Have a laugh! Make a (Spende) donation! Help those in need! This innovative way of fighting (Ungerechtigkeit) injustice and (Armut) poverty has been working perfectly in the UK for almost 20 years.

It all began in 1985, when a (Hungersnot) famine struck Ethiopia. In response to this direct emergency, a non-profit organisation called Comic Relief was (to launch = ins Leben rufen) launched from a (Flüchtlingslager) refugee camp in Safawa, Sudan. The aim of this organisation is to help poor and disadvantaged people both in Africa and the UK to (ihre Probleme anzugehen) tackle their problems.

Launched by British comedians, Comic Relief tries to get serious messages across (mittels, mithilfe von) by means of comedy and laughter. In 1988 the first Red Nose Day was organised, which meanwhile has become the biggest TV (Spendenaktion) fundraising event in the UK. On Red Nose Day everyone is encouraged to put on a red nose and do something (hier: verrückt, albern) silly to (Geld aufbringen) raise money. It is an event that unites the entire nation in trying to make a difference to the lives of thousands of individuals who are facing terrible injustice or poverty.

Last year, Pro7 broadcasted the first Red Nose Day show on German TV. This year’s Red Nose Day is held on 11 March. Prepare for a great show as lots and lots of comedians, musicians and actors are performing.

So have a laugh! Make a donation! Help those in need!

If you wish to (einen Beitrag leisten) make a contribution, go and get your red nose (at Burger King, miniMAL, HL Markt, Weltbild, Rewe) or make a donation:

The money then goes to:
Kindernothilfe
Children for a better world
Off-Road-Kids
Comic Relief