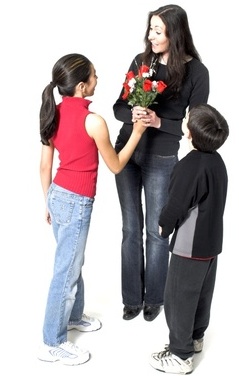 A mother's love is a (Segen) blessing,
No matter where you (herumwandern, herumtreiben; hier: sein) roam.
Keep her while she's living,
You'll miss her when she's gone.
Love her as in childhood,
When (schwach) feeble, old and grey,
For you'll never miss a mother's love
'til she's (begraben) buried beneath the (Lehm; hier: Boden) clay.

Although England had some kind of Mother's Day already in the 18th century, it is less than a hundred years ago that the tradition started in the USA and many other countries.

The American Anna Jarvis from Grafton, West Virginia, is known to be the mother of Mother's Day. She lived at a time when most women (to devote one's life = sich zur Lebensaufgabe machen) devoted their lives (ausschließlich, einzig, allein) solely to their families and homes, but their work as mothers was not (anerkannt) recognised and (geehrt) honoured. There were several reform movements, however, that wanted to change the women's situation. Anna's mother, Anna Marie Reeves Jarvis, was engaged in such reform movements as well. She also taught at Sunday School in Andrew's Church, Grafton where one day she finished her lesson with a (Gebet) prayer that was to (stick in one's mind = sich jemandem einprägen) stick in Anna's mind for ever:

"I hope that someone, sometime will (gründen, begründen) found a memorial mother's day (to commemorate = gedenken) commemorating her for the (unvergleichlich) matchless service she (to render = leisten, erweisen) renders to humanity in every field of life."

When her mother died on 9 May 1905, Anna decided to (widmen) dedicate her life to establish a day in honour of mothers. So, Anna Jarvis started writing letters to influential people, and on the second anniversary of her mother's death a (Gedenkgottesdienst) memorial service was held at Andrew's Church in Grafton, where her mother had taught. At that occasion Anna passed out (Nelken) carnations, her mother's favourite flowers: a red carnation was worn to honour a living mother, and a white one to honour a (verstorben) deceased mother. The idea of commemorating mothers (sich ausbreiten, verbreiten) spread rapidly, and on 8 May 1914, President Woodrow Wilson signed a resolution naming the second Sunday in May as Mother's Day.

Many countries now celebrate Mother's Day on the second Sunday of May, but other countries celebrate it at different times throughout the year. In the UK for example Mothering Sunday is on the 4th Sunday in (Fastenzeit) Lent, originally a day in honour of Mary, the mother of Jesus Christ.