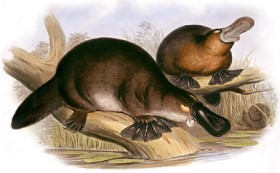 The (Schnabeltier) platypus was first written about in 1797. An (Bericht) account described it as a small fur-bearing animal with (Schwimmhäute an den Füßen) webbed feet and (biberartig) beaver like tail. The head featured a flat (Schnabel) beak like a duck. The feet were webbed for efficient swimming. Long sharp claws on the feet help it (buddeln) burrow out a (Bau) den. Thus the platypus lives both in water and on land.

The scientific elite were (misstrauisch) suspicious that the account was a wild story like sailors of the time told about (Meerjungfrauen) mermaids. When a (konserviert) pickled pair of (der Schnabeltierart) duck-billed-platypus specimens were (seziert) dissected by a (anerkannt) noted anatomist, the scientific world was (erstaunt) stunned to learn it was a (echt) genuine animal. Scientists had difficulty believing there was an animal that could lay eggs and also (säugen) suckle its youngsters. In 1884 a British zoologist found two platypus eggs. The eggs had soft (Schalen) shells like those laid by a (Echse) lizard. The platypus is a very old species. It is thought to be a (Übergangsform) link species between reptiles and mammals.

The name platypus comes from the Greek language for flat foot. Still more was learned about this animal. Its cheeks contain specialized (Taschen) pouches used to store sand and (Kies, Schotter) gravel. These minerals are used to (zermahlen) grind up worms and small shelled water organisms. The platypus has the ability to close both its eyes and ear openings when it swims under water.

The mother platypus (herausquellen lassen) oozes milk from her (Bauch, Unterleib) abdomen. The platy kittens lick the milk off of her (Fell) fur. The male platypus has (Giftsporne) poisonous spurs located on his (hintere Knöchel) rear ankles. This is used for (Verteidigung) defence. Platypus are (sehr reinliche Tiere) conscientious groomers. They (putzen) preen their fur with their rear claws after emerging from the water. The size of the platypus is about twenty inches in length. They weigh between two and three pounds. They are big eaters for their size. Mostly they feed between dusk and the early morning hours. Platypus swim with their eyes closed and (aufspüren) sense their (Beute) prey, guided with their sensitive (Schnabel) bill.

Platypus have been (gezüchtet) bred in (Gefangenschaft) captivity. Ten years is the longest time a pair of platypus have been kept alive in captivity. They were featured at the Bronx Zoo in New York. The pair were named Cecil and Penelope and they lived on a feast of twenty five thousand worms a month. Their diet was spiced up with crayfish, frogs and egg custard. The Platypus were the most expensive species to take care of in the zoo as they ate a higher dollar amount than the elephants did. The zoo keepers hoped they would produce some young ones and they were watched closely. At one point the keepers thought that Penelope might be expecting young ones as she had (zurückgezogen) secluded herself inside her (Bau) burrow. Before the cold winter months started they dug her up. She was found alone with no young ones. Later she escaped from the zoo, never to be seen again. Cecil lasted another two years before he died.

The life span of a platypus is seventeen years. They have few natural enemies but these include black rats and (fleischfressende Dorscharten) carnivorous cod fish.

The platypus is now protected now by Australian law, ensuring their continued survival in the future.