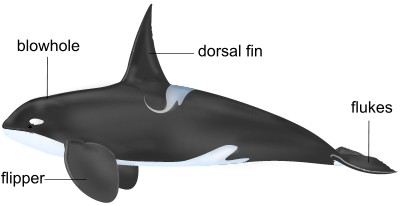 Reaching up to ten metres in length, the orca is the largest member of the dolphin family. Most of its body is black, but you can distinguish some lighter areas: an elliptical white patch behind each eye, a grey saddle-patch behind the dorsal fin, a large white area on the belly and on the undersides of the flukes.

Male orcas are easily identified by their tall dorsal fins, which are about 1.8 m in height. In female orcas, the dorsal fins are much smaller and more rounded.

Like most of the toothed whales, orcas are highly social animals. They live in family groups called pods. The size of a pod can vary from just a few animals to as many as fifty.

in all oceans, but mostly in cooler waters.

Do you know why orcas are sometimes called ‘killer whales’? As orcas often attack and eat other whales, Spanish whalers called them ‘whale killers’. These words were, however, reversed for some reason and that's why today orcas are also known as ‘killer whales’.