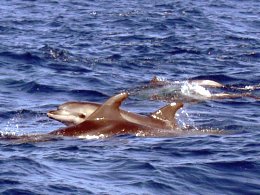 In the (enge Grenzen) tight confines of a (hier: Zementbecken) cement enclosure; a dolphin swam a repeated pattern of circles. It was (Dämmerung) twilight and she was alone in the (Becken) tank.

Earlier that day, she had performed her tricks for the people that (flock = in Scharen kommen) flocked to see her; and though this provided her with some faintly pleasing form of (Abwechslung) diversion, it did not (ausschließen) preclude the forced isolation she experienced daily, away from her (Herde, Delfinschule) pod and her family.

Later that afternoon, her (Wärter) attendants had arrived and conducted their usual set of tests on her. She had (willig unterordnen) yielded meekly enough to their (Dienste) ministrations. This pleased them, as it always did; they took such delight from the most (ärmlich) meager of her offerings. But, if she did not (sich fügen) submit to them in a (demütig) humble manner, they (assume = annehmen, denken) assumed there was a problem; and as a result, they would order more undesirable tests be done.

She (submerge = abtauchen, untertauchen) submerged and (gaze = starren) gazed through the heavy-plated window in the cement wall of her aquarium. Maintenance lights pulsed and glowed in the now-dark observatory room.

During the day, visitors crowded together in this lower level viewing room. They all wanted to (einen Blick erhaschen) catch a glimpse of her from an underwater perspective. And the glass was (schmutzig) muddy with the hand prints of the many children who had pressed close to get a good view.

The routine of her days rarely varied. Sometimes the trainers would come in to teach her new tricks, to be added to her show. Other times, on rare occasion, humans would bring their (krank) ailing and disabled children to swim in the water with her. And she would heal them, over time. But she would do so only by tempering the process—slowing it down—so as not to (erkennen geben) reveal too astounding an ability to the humans. A family might have to make several return trips, for the dolphin to fully heal their child.

She swam up to the surface; then gazed (leidenschaftslos) dispassionately at the stars in the firmament above her.

She was far from her pod; and she was lonely.

She swam a few more (Runden) laps, then stopped.

In the dark of her enclosure; she sang …

But none of her (Art) kind heard her.

My works have been featured in many online publications and in traditional print. I am also a weekly columnist for the publication “Frank Talk” which is distributed in several counties in the tri-state area of Michigan, Ohio, and Missouri. I've written four books and my fifth book, “For the Spirit-Soul,” a collection of my short stories and poems is now available.